Covid-19 Update- we are temporarily running the business on a skeleton staff, please bear with during this difficult time. The telephones are still being manned so please call if your enquiry is urgent.
Read our Statement
Skip to content
Basketball England, Millhouses ParkligUsewAmi92019-12-06T09:14:23+00:00

“We are thrilled with the new courts. We are really impressed with how the project was managed from start to finish. We have received some excellent feedback from players who have used the court since its completion. The number of baskets and new mini baskets for young children makes the site suitable for all ages and I am really excited to see it in use.” 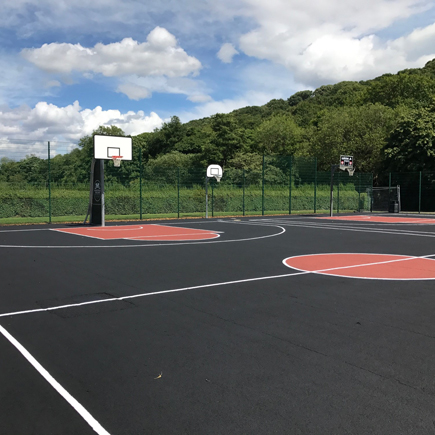 As one of the UK’s leading suppliers and installers of
multi use games areas we specialise in sports such as
football and basketball so when Basketball England
asked us to work with them on a pilot project, we
jumped at the chance.

This court is just one in a series of refurbishment
projects across the country where Basketball England
aims to revamp those within urban populations.
To start the project, we hired a civil engineer to
determine what pad sizes were needed to support
the new and existing frames and what depths of
excavation needed to be done to keep them in place.
Once this was complete, we could start sinking the
pads in to concrete and allowing them to set ready for
the installation of the frames.

To ensure the ball does not leave the court when
thrown, we extended one side of the fence to 4 metres
high. We removed the existing 3m posts and replaced
them with sturdy 4m high columns and a 1m high
fence panel extension.
To give the existing frames a fresh feel, we removed
the old polycarbonate front of both boards and
replaced with new.
The next part of the project was the installation of
the frames. The existing frames were installed onto
their new pads along with new anti-theft bolts. The
reduced height basketball frames were ideal for the
younger players and were set at 8ft high rather than
the standard 10ft.
To put Basketball England’s stamp on the court, we
designed two bespoke frames which featured the
organisation’s logo on a HDPE panel. High-density
polyethylene is extremely strong and will withstand all
weather conditions so it was an ideal choice to feature
on the frame. The bespoke units also featured a
flexi-hoop which allows users to dunk the ball without
damaging the hoop.
The most time consuming part of the project was
waiting for suitable weather to lay the new surfacing.
Dry weather is always needed when laying any surface
and particularly with acrylic paint.
We gave the court a completely new look thanks to
the anti-slip and anti-glare court paint. To ensure the
new surface adhered to the existing tarmac, we first
power-washed and treated the tarmac before laying
a chemical bonding agent to allow the acrylic paint to
stick to it.

To make the court really stand out, we painted the
court black with white and red line markings. To cater
for younger players, we included colourful spots on the
floor to help them with their shooting skills.
Overall, the new court now caters for all ages groups
and all abilities and looks appealing to attract new
users and get more interest in the sport